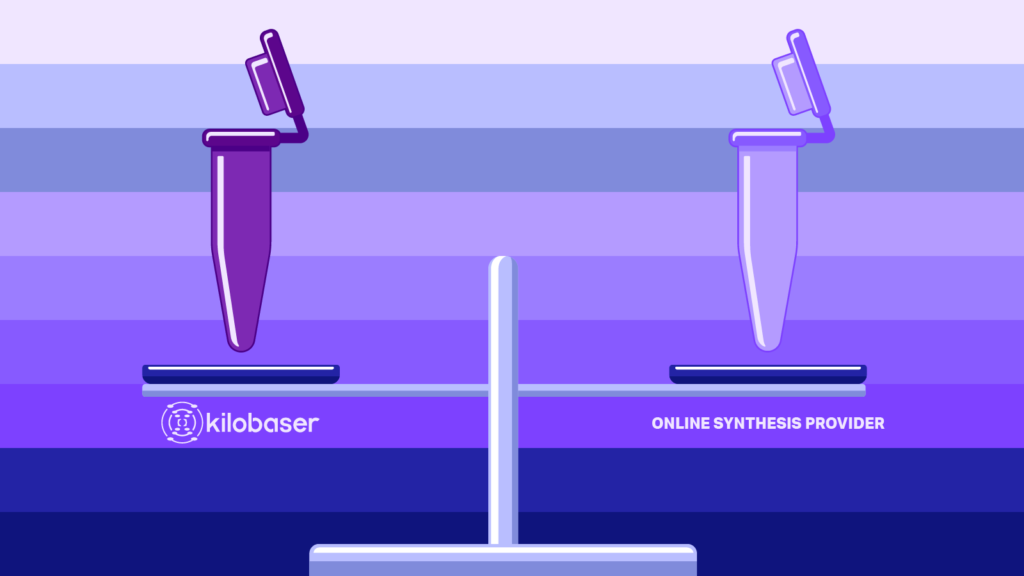 To analyze the performance of primers printed with a Kilobaser machine, we compared a PCR reaction with Kilobaser primers to primers bought from a standard vendor. In the final analysis of the PCR fragments on an agarose gel, no difference is discernible.

Colony PCR is the process of picking a single colony of bacteria and running a PCR on the bacteria to see if they carry a gene of interest. Therefore, bacteria are diluted in sterile water and added to the PCR reaction mix. The heat of the PCR will break up the bacteria, and thus no DNA extraction is required beforehand.

In order to handle DNA fragments and replicate them in bacteria, plasmids are routinely used. For large DNA fragments, plasmids can have too little payload size and then bacterial artificial chromosomes (BACs) are used. The standard pUC plasmid seems to hold maximally 15’000 basepairs of DNA, but the exact payload capacity seems to be dependent on other factors such as the actual sequence. A common bacterial artificial chromosome is pBelobac11, which can hold up to 300’000 basepairs of DNA. In order to read all of the human DNA in the human genome project, human DNA was randomly cut into pieces using restriction enzymes and then the fragments were ligated into BACs. The BAC contains known sequences and thus Sanger sequencing of the fragments could be done.

To verify that the bacteria still contain the bacterial artificial chromosome, we did colony PCR of a single colony of E. coli.

We took up a colony of bacteria with a sterile inoculation loop and put them into 300 µL autoclaved deionized water. Subsequently, we took 1 µL of the solution as template and put it into a 50 µL PCR mix. The PCR fragments were then put onto a 1% agarose gel and separated according to size.

300 pmol primers were printed, and subsequently diluted in 30 µL nuclease-free water. 1 µL of each resulting 10 pmol/µL primer was taken and added to the PCR reaction.

The following profile was used:

This reaction was run for 38 cycles.

Figure 1 shows the resulting agarose gel on the transilluminator. The bands were as follows: 100 bp ladder, UL30 with primers of another company, UL30 with Kilobaser primers, Lambda-Hind ladder, gC with primers of another company, gC with Kilobaser primers, UL6 with primers of another company, UL6 with Kilobaser primers. The UL30 primers were designed to create a 179 bp band. The last strongly visible band of the lambda-hind ladder is 2027 bp and the PCR product is clearly below that. It appeared to be somewhere between the 100 bp and 200 bp standard. We expected the primers for gC to create a 197 bp band, instead they produced a band that should be on the lower end between 1500 and 2000 bp when comparing it to the 100 bp ladder. The reaction worked consistently though with primers from Kilobaser and the standard service provider company. We will have to analyze primer design or try different temperatures for this. The UL6 PCR product was expected to be 142 bp and this fits the 100 bp ladder.

We do not see any noticeable difference between the PCR reaction done with Kilobaser-printed primers compared to a routine primer providing company.

We did not see any difference between primers used with the Kilobaser versus a standard company. Thus, we found them to be equivalent, with the only difference being that the Kilobaser primers can be used faster as they can be printed on-site. Our glyC primer pair will have to be checked, and different PCR conditions might be needed for that reaction.