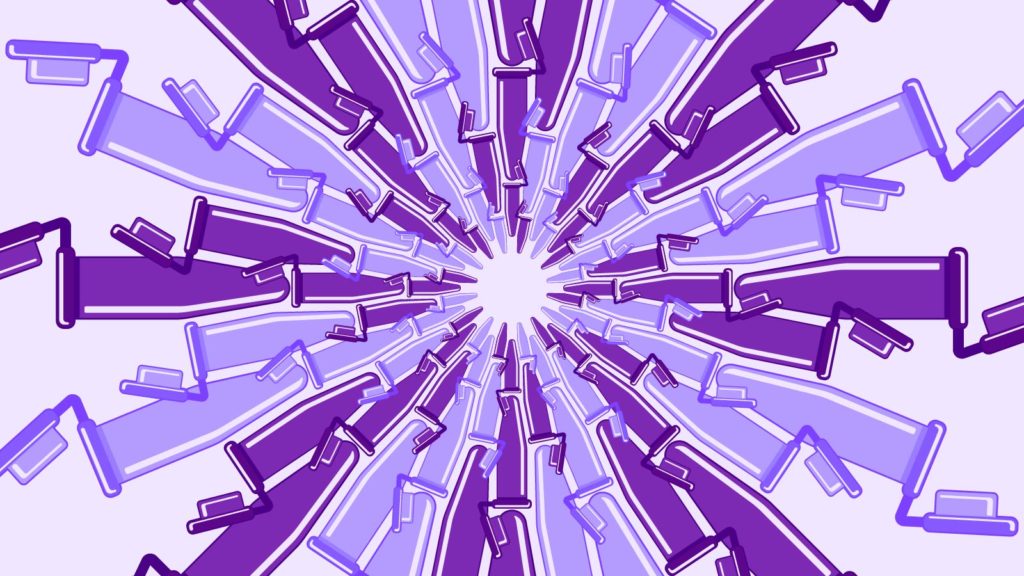 How does PCR work?

Polymerase chain reaction (PCR) is a common molecular technique to create millions or even billions of copies of a certain fragment of DNA in vitro. Our DNA synthesizer, called Kilobaser, produces these small synthetic DNA fragments, which are necessary for every PCR. The DNA region can be anything scientists are interested in. For instance, in forensics it might be a genetic marker used in order to match DNA from crime scenes with a suspect, or a particular gene a researcher wants to understand. The most important use of PCR right now is to test Covid-19 patients. It is not only a tool to explore particular DNA regions but also a method to detect genes in order to identify viruses. In these times we see how important quick and accurate analysis are, especially now with COVID-19.

The goal of PCR is to create a sufficient amount of the target DNA region that it can be used in further experiments. PCR reaction includes a DNA polymerase, primers, template DNA and nucleotides, which are referred to as the DNA building blocks. Along with cofactors for the enzyme, all the elements are mixed in a tube in order to undergo repeated cycles of 3 basic steps.

A DNA Polymerase enzyme, that builds new DNA strands using existing DNA templates, is needed to perform a PCR. Typically, it is a Taq DNA polymerase, isolated from the bacterium, Thermus aquaticus. This recombinant DNA polymerase is activated at a temperature of 70°C, which makes it very stable to heat and thus ideal for PCR.

DNA Polymerase needs an existing target DNA, in order to synthesize new DNA. The researcher decides which region of DNA should be massively copied, by selecting primers. PCR primers, are short sequences of nucleic acid, usually about 18-22base pairs (bp) in length. Each PCR reaction requires two primers. A forward and a reverse primer, which are designed so that they label both ends of the target region. As soon as primers are bound to opposite strands of the template (by complementary base pairing), the polymerase starts adding new nucleotides to the primers. As a result, the region that lies between the primers, namely the region the researcher is interested in, will get copied.

The three steps of PCR

DNA is synthesized in a thermocylcler creating repeated cycles of heating and cooling.

2. Annealing (55-65°C): Reaction is cooled down to a temperature where primers are able to bind to their complementary sequences of DNA.

3. Extension (72°C): In the third step, temperature is raised, so that Taq polymerase extends the primers from 5´ to 3´ end. New strands of DNA are synthesized.

In a typical PCR reaction this cycle is repeated 25 – 35 times. A new synthesized DNA strand in one cycle serves as a template in the following cycle, resulting in a geometric doubling of the target DNA. The product of the PCR, might be cloned into a plasmid, visualized using gel electrophoresis or sent for DNA sequencing.

How Corona is detected using PCR?

PCR is widely applied in many research labs and now it is one of the most important tools in medical diagnostics to test if coronavirus (SARS-CoV-2) is present in a patient. SARS-CoV-2 is a RNA (ribonucleic acid) virus, which causes respiratory illness in humans. It contains a very long single-stranded RNA genome, which is the genetic material of the virus.

Initially viral RNA is extracted from a sample, usually coming from a patient´s respiratory system. Special COVID-19 RT-PCR kits used by the World Health Organization’s (WHO) and Center for disease control prevention (CDC) target parts on a gene that codes for the protein that builds the nucleocapsid of the virus, an envelope that surrounds its RNA.

To detect viral RNA with PCR, purified RNA molecules must be first converted into their complementary DNA sequences by Reverse Transcriptase. Then newly synthesized DNA can then be amplified by a real time RT-PCR. The PCR product are millions of copies of the target sequence, which can be compared to SARS-CoV-2 and determine wheter a sample is positive or negative for Coronavirus. Positive results are an indication of an active infection with COVID-19.

Why Kilobaser can be a helpful device during Corona?

Now a lot of scientists are focused on exploring and understanding the virus, SARS-CoV-2. They are working on developing new PCR tests for diagnosing the virus, medications and vaccines against it. Tasks, where DNA sequences encoding viral proteins, are needed. Having a personal DNA synthesizer accelerates these processes.

As mentioned in the beginning, Kilobaser is a personal DNA synthesizer, which is able to produce DNA primers and oligonucleotides within 1 hour. PCR tests cannot be performed without primers, therefore Kilobaser, is a very useful device to create a fluent workflow in labs. Most research groups do not have access to a DNA synthesizer and rely on ordering DNA molecules from other service providers. Ordering and waiting for primers for days or even weeks interrupt the workflow immensely.

Therefore, our goal is that individual scientists are independently able to make DNA sequences by themselves to use it right away for further experiments without being dependent on other service providers. This could advance the independent research and decrease unnecessary waiting time especially now where supply chains are slowed down or even disrupted.

DNA Data Storage
Multiplex PCR – It’s a party in my eppi!
The Pain of Primer Dimer
One Step RT-qPCR – Application Note
We use cookies on our website to give you the most relevant experience by remembering your preferences and repeat visits. OK Read more
Privacy & Cookies Policy