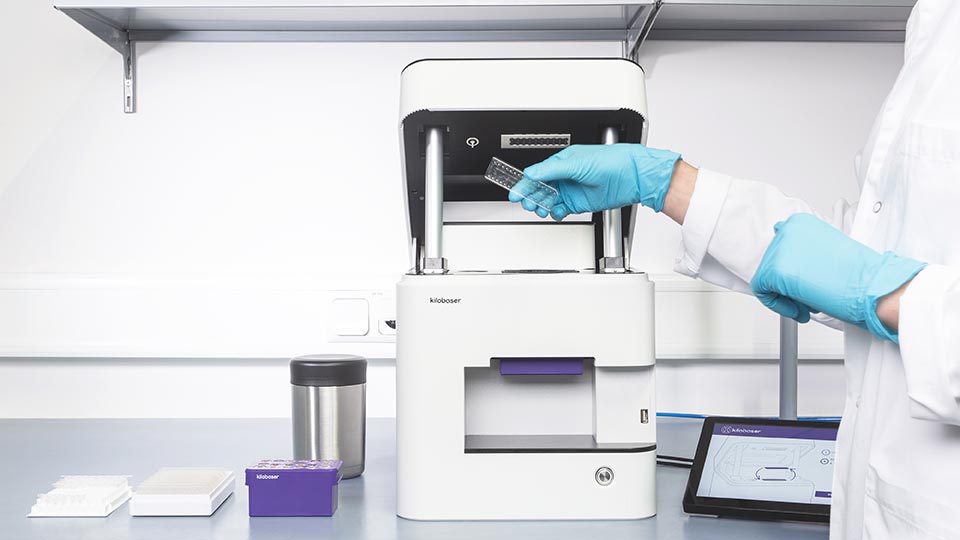 „KiloBaser is like a Nespresso machine for DNA synthesis. But instead of making your coffee, it extremely simplifies the process of producing DNA, thanks to our revolutionary single-cartridge system. The cut-down on weeks of waiting time for DNA primers – usually ordered from service providers – potentially results in dramatic acceleration of various research efforts for novel pharmaceuticals, therapies and other innovative applications of genetic engineering.“ – Alexander Murer, CEO of Briefcase Biotec.

The device incorporates microfluidic and novel cartridge technology. It is specifically targeted at individual scientists in academic or corporate research labs and intended as personal „rapid prototyper“ for DNA – especially for short DNA molecules such as oligos and primers.

„Fast and low cost DNA manufacturing is a key part of indie-bio future and we are very proud to invest into KiloBaser.“ – Bill Liao, investment partner.

The founders are graduates of the first accelerator program for synthetic biology: Indie.bio. The accelerator took place in Cork, Ireland in summer 2014 and was organized by SOSventures in cooperation with University College Cork (UCC). Briefcase Biotec GmbH was founded shortly after in December 2014 in Graz, Austria by Alexander Murer, Martin Jost (students of molecular biology) and Bernhard Tittelbach (electrical engineer and computer scientist). Unlike traditional biotech start-ups, which are mostly academic spin-offs, the concept and early stage development was carried out in the local biohackerspace “Open Biolab Graz-Austria”, which Murer and Jost founded together with others two years ago.

SOSventures is a $220 million venture capital fund that invests in startups, primarily those that it helps get started through its global accelerator programs. Founded in 1993, with offices in Europe (Cork, Ireland), the US (New York, San Francisco) and China (Shenzhen, Dalian), SOSventures actively provides mentoring, design, sourcing and business coaching to enable its portfolio companies to grow globally. Through its accelerator programs, SOSventures now assists in the launch of over 50 new companies a year and it has provided follow on and direct funding to hundreds of companies worldwide.